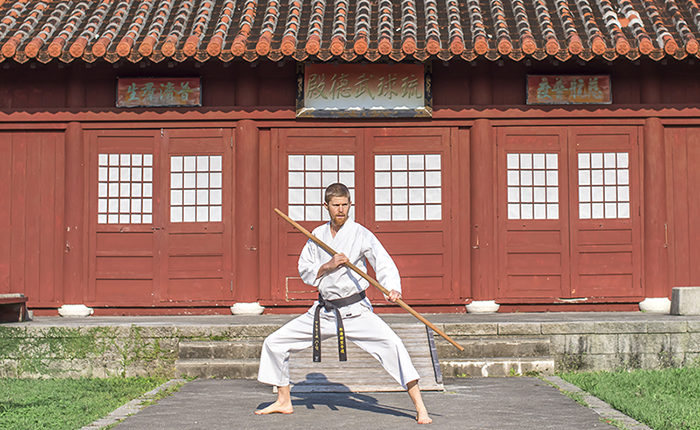 For millennia, humans have been using long, blunt weapons to fight animals and competing tribes. Over time, these techniques became more martial in nature, and more refined for combat purposes. This was the birth of what is now known as bojutsu. In this article, I will chronicle four purported instances in which bo (staffs) were used in battles.

The invasion of the Ryukyu Kingdom by the mighty Satsuma Clan in 1609 culminated from repeated refusals by the Okinawans to provide military aid for the Satsuma clan’s invasions and operations. The Satsuma Clan and the Ryukyu Kingdom had, for a long time, maintained great relationships, involving themselves in back-and-forth trade and establishing a strong alliance. However, when Toyotomi Hideyoshi repeatedly demanded aid from Ryukyu and they failed to deliver it, all-out-war broke out in March and May of 1609. This time was considered the end of “Ancient” Asia.

The King sent over a hundred warships to the islands and unloaded a “strike team” of 3,000 Samurai warriors, who headed inland to plunder villages, towns and settlements. Claiming that the Ryukyu territory had already belonged to them, these trained fighters proceeded to attack helpless civilians.

It’s most probable that peasants and farmers gathered at geographically advantageous sites to fight off the heavily armed samurai warriors, using long, wooden poles as their only weapons. There are tales of brave men besieging the newly-arrived ships on the coasts, likely attacking the passengers with sticks. As the Satsuma Clan began enforcing strict and cruel weapons-laws upon the residents, they rose up and rebelled, using the bo as their sole weapon. Although the actual invasion was relatively short-lived, the cruel leadership and dominance of the Satsuma Clan over the poor Okinawan folk left a lasting effect. It was in this age that the bo had a sudden jump in popularity as it was the only form of self-defense the Okinawans could yield. A particularly miserable and restricted time it was, but it caused a new culture to rise out of sheer necessity.

For over fourteen years, the poor in China fought a brutal civil war against the Qing Dynasty. Supporters of the “Taiping Heavenly Kingdom” armed themselves with whatever weapons were easily accessible and flocked to their leader, Hong Xiuquan. He was the proclaimed little brother of Jesus. The people of the lower feudal end of China’s hierarchy were becoming devoted followers of Christianity. The Taiping Rebellion is often considered the most horrendous civil war in Asian history, due to its duration, manpower and fighting style. Almost certainly the bo was an integral part of the conflict as most of the Christian rebels were poor and unable to afford bladed weapons or bows. As the battles dragged out, more and more combatants were needed and, therefore, masters of bojutsu were officially drafted into the revolting army.

Despite being only used as back-up units of reinforcements, the bo warriors would have served a good advantage in the rebelling armies. They were the core of Taiping Psychology; these were the men – and probably sometimes women – who strongly disapproved of the Qing Dynasty. Consequently, their fighting style was probably more aggressive and rooted in personal beliefs and discontent.

At the River Huangpu on the 21st of July 1553, a band of tough Shaolin warrior monks clashed with Japanese pirates, known as “woku” or dwarves, who were invading to steal goods and produce. The monastic order fought mercilessly, chasing the thieves miles away and eventually slaughtering every last one of them. There was no dignified or organized combat; the battle played out as a dramatic hand-to-hand melee conflict and it was an “every-man-for-himself”. Although the Japanese Pirates were most likely better armed than the religious figures, the monks applied their learnt skills and refused to back down until the day was carried. Despite many of the men using swords, the bo was certainly used significantly and effectively during the fight.

“Is there any martial art in which you are good enough to justify your claim for superiority over me?” – Words of Shaolin Monk Tianyuan, as recorded by Zehn in 1568.

The Shaolin Monks, some of which had been training in the monastic order since the age of three, would have been extremely disciplined in martial arts and no doubt their training must have payed off. The psychological effect of such well-learned warriors upon the invading pirates must have been powerful and terrible people. Not to mention that the Shaolin monks were driven by passion for religion and philosophy, and, secluded and separated from the normal human world, they probably had a more eager fighting attitude, determined to prove their might in contrast to humbleness and shyness. Following the defeat of the Japanese thieves/pirates, the Shaolin monks’ reputation only soared. They were now renowned for their incredible combat abilities and strength, and multiple times were drafted into armies to fight.

In 1937, China and Japan fell out over an incident at the Marco Polo Bridge, which led to Japan’s cruel invasion of their contemporary. This occupation of land and ensuing conflict was named the Second Sino-Japanese War and saw high levels of brutality towards Chinese soldiers and citizens. It is easy to conclude that pole weapons like the bo were used as physical punishments for prisoners or war, and often local residents. The bo may also have been a favored display weapon for Japanese generals and officers, who reveled in the harshness of using it as a beating stick. Particularly harsh were the tortures inflicted upon Chinese victims.

Of course, the bo would never have been used as a weapon in genuine warfare during the Second World War. Against ranged weapons such as snipers and machine guns it posed no threat, and was limited to only close combat, where the bo would likely be destroyed by a sword. Instead, teachers of bojutsu might have been recommended as teachers at military training camps, due to their strong physique and determination.

In the modern era, the bo is not extremely useful on the battlefield. Although, similar techniques are used with bayonets and rifles in close range combat, when firearms are not ideal. Bo training for self defense purposes has applications when defending against an empty-hand attacker, or even against an attacker with a blunt weapon, or a bladed weapon. Bo training has physical benefits that lead to a greater range of motion, learning body alignment, strengthening of your core, fitness, self-control, and concentration. By training in a modern style such as Ultimate Bo, the student has can transport himself back in time to understand how the staff was used on the battlefield. In by doing so, the student can make personal improvement and personal transformation, in a non-martial way.