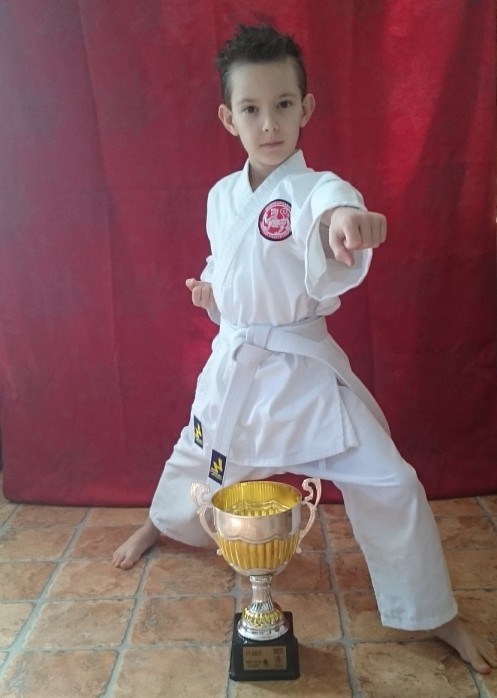 We are very proud of our 9 year old student, Gabriel, from Quebec. He started training in Ultimate Bo and Shotokan Karate with us at Black Belt at Home just four months ago.

He is a true home training success story. He just competed in a regional tournament in Victoriaville, QC on last month. He won 1st place in traditional kata and 1st place in weapons! He does not even attend a dojo or train in person like all of his competitors do. He displayed fantastic intensity and control in his Bo Kata 1 & Taikyoku Nidan, check it out in the videos below:

Since then, he has also attended another regional tournament in Quebec, in which he took home 1st place again in Bo and Shotokan (with BO Kata 2 and Taykioku Sandan. His intensity, presence, and confidence have only grown since day one of his training with us; and want to highlight this.

Not only does he train in a very focused way with our videos at home, but his parents are huge supporters. They work with him, they review our videos, our feedback videos, and make sure he is pushed to become better every day they practice at their house. It is rare to find parents that are actually that involved. Really, it would be easier for them to just drive him to a local academy and drop him off for classes; but they work and learn along his side. That’s a family.
If you do not think that training at home makes you a better martial artist, or that it is really not possible, Gabriel just proved you wrong. We can’t wait to see him continue to improve with us in his journey to black belt!

In his own words: “Born and raised in Italy, after a normal life as a teenager, I decided to change my life and do something different. So I left my home at the age of 19 and traveled the world a little bit, in the Italian Army first, than as a manager of sailing schools, motorboats pilot, and then, 3 years ago I moved with my wife and my son Diego in Boston. Here I studied to become a Surgical Technologist and welcomed my daughter Julia . I’m currently working at the Mass General Hospital, but in May we will move to Charleston SC and start working at the Medical University of South Carolina. And that should be the last move! After 15 years I believe it is time to put root somewhere.

I studied Karate with my father for several years when I was a teenager. He is a black belt, but not an instructor, so I never earned any Kyú. We focused more on techniques and kumite, not much on kata. I also studied some Shaolin Kung Fu, and learn meditation.
After years of little to non practice because of my traveling, when I’ve found the Complete Shotokan course, I figured I had found a guide to back practice Karate with consistency and method. And it works! I train 6 days a week and I am very happy with it.
This course also brought me back the benefit of meditation, pushing me to find the time do it.“