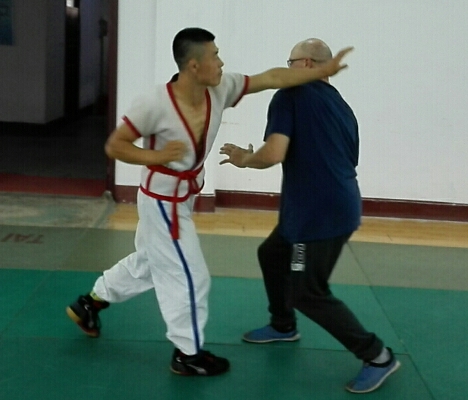 In their own words:

Wayne: “I am a 45 year ‘young’ Caucasian who comes from Durban, South Africa. I served in both the ‘old’ and ‘new’ Defense force there after completing high school. As a young child, I only trained for my grading in Yellow Belt Funakoshi Karate but never got to do it due to my grandparents having financial constraints. This was all I knew…and I practiced this as the years went by. I then moved to China and have been living here for just over ten years. Even though I have been here for so long I still grapple with cultural and language issues. A couple of months before enrolling with your Krav Maga course, I also enrolled with online Karate through another school and because all I knew was the basics, getting back into Karate was like a duck to water. The reason I took both Karate and Krav Maga online is for two reasons:

(1.) I am hoping to train others and pass on the skills that I have learnt from the Martial Arts Academy. Due to the very high and violent crime rates in South Africa, I am preparing myself to hopefully better equip and protect myself if and when I do return there.
(2.) The vast majority of Martial Arts schools in this part of China focus mainly on Kung Fu, Gong Fu/Wu Shu (as it is called here), Tai Chi and Korean Taekwondo. Their training venues are too far away from where I reside and this is not the direction I want to go in so far as Martial Arts is concerned. Besides, to train in Kung Fu is no joke and is unlike training in Krav Maga and/or Karate. When I approached Feng, and asked him to be my training partner, he jumped at the opportunity. After completion of my Krav Maga with Sensei’s Michael Hodge and Michael South, I am hoping to enroll in the Martial Arts University Karate program….even though I will have completed training in another style. I am also slightly hard of hearing (not deaf) and sometimes, not all the time, wear a hearing aid, though I have never allowed this, ( neither my age!) to interfere with my work, social life and now my training. By profession, I teach English here as a teacher and have my own business working from home.”

Feng: “He is 38 years of age. He started training in wrestling from a very young age and over the years became better and better at this. The result has been that he has now earned himself the title of literally a ‘Wrestling Champion’. He holds a number of titles from Wrestling matches and Championships from China and due to this fact, he now trains young kids and adults in the art of Wrestling for a living. Wayne is very privileged to have him as his training partner.”

About the Martial Arts Krav Maga program: “Being a teacher myself, Sensei Michael South could not have done his program in DVD format better. There is a Chinese saying with words to the effect of ‘I teach myself first, then I teach others’. Sensei Michael South clearly knows what he is saying and doing when it can be seen how he has presented his training step by step and in such a way that even a child of seven years of age could put it into practice. We have both found his training to be clear and concise and he does not just tell you the “how” to put your Krav Maga into practice but he tells you the “why” which is equally just as important. Many times we really don’t know the reason(s) why we do what we have to do when it comes to training, but it is important that one understands the reasons for it as well.

In spite of the numerous obstacles I faced in trying to pay for the Krav Maga course (due to China’s control of money going into and out of the country and Paypal not working effectively and so freely like it does in most countries.) This in addition to having to use a VPN to access the Internet unhindered and also so that I can access my student journal. Without a VPN, I would not be able to fulfill the minimum requirements for the Krav Maga course. In spite of all these challenges, the support and understanding rendered by Sensei’s Michael South and Michael Hodge have been AMAZING! As the saying goes, “Where there is a Will, there is a Way”. With all of these challenges I have faced and continue to face, there is really no excuse for prospective and future students who would like to enroll in such high quality training offered by the Martial Arts University. If a donkey like me can do it, in spite of the challenges, anyone can. I would encourage you to do so. You have nothing to lose and everything to gain.”

The instructors chose to highlight Wayne and Feng this month for their obvious commitment to overcoming obstacles and helping each other become better martial artists. They have been consistently practice, logging their sessions, sending in videos, and taking full advantage of our interactive online university. 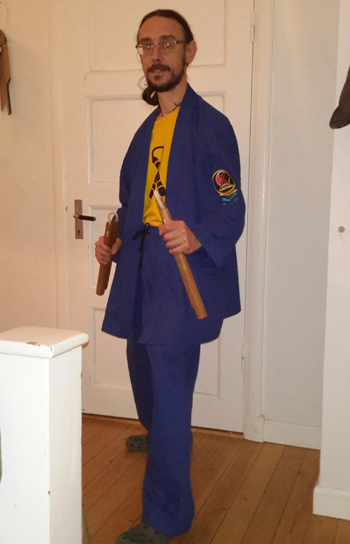 In his own words: “My name is Maurizio Del Rosso, I’m 49 years old I’m Italian from Milan but I live in Sweden not far from Gothenburg.
I have worked with computer as operator in Italy and Sweden and before that I worked as a delivery driver and before that in a kitchen in Milan.
Together with my wife Jenny I run a small typical Italian pasta restaurant with catering for the last six years.

Our family is composed also by our three children Annie and Emil twins 13 years old and Axel 11 years old, we also have a dog Shiba Inu named Asahi 14 years. I had a nunchaku Shureido as a souvenir and I started last year seriously to train following the course of ultimate chuks that I found on the web.

At the beginning the nunchaku seemed heavy and bulky but with the training of ultimate chuks a bit by bit you become more familiar with the weapon, step by step. With this course it is easier to learn because I can watch the video many many times and to have the possibility to repeat which part that was more difficult.

Today I work also with two weapons and and it is even more beautiful because I train simultaneously using both arms and I also train my concentration. For a few months I managed to train almost every day about 1 hour and thanks to that I defeated my sore back..now it’is really like zero!!

I have past experience with martial arts for almost two years of kung fu Shaolin. I was able to engage in training even my kids who have with my wife practiced taekwondo for almost two years. The training with my kids I organized so that they trained one by one for 20 minutes each one.“

Sensei Michael chose to highlight Maurizio this month because of his uncanny determination to improve and share his wisdom with his kids. Through his journey, he has been able to strengthen his back, spend quality time with the family, and reach goal after goal.