In his own words: “I am 46 years old and have worked in the corporate world for over 25 of it. My career path has taken from procuring materials around the globe to now buying proteins (meat) for school districts and restaurants. My residence is in Allendale, Michigan and grew up in this area with a five year time out in Los Angeles when I was younger.

This month will be 20 years in the thing that I love the most. My first black belt was in 1998 in Shorin Ryu, which I also received a 2nd degree. Then bought a new house and had to move away from that school.

I walked in and tried out a Tae Kwon Do class at Standale Karate in the new town. The year was 2002 and I wore shorts and a T-shirt. After class the instructor came up to me and said make sure you where your black belt the next time you come to class. He then put me in the front row with the other black belts and after a month or two told me that if I learned all the requirements for a 3rd degree in Tae Kwon Do he would allow me to test. It was intense and over 60 plus forms and some weapons.

During this time the school started a partnership with Kicks for Christ in the town. We trained each other in our different style. They were Tang Soo Do. Over the next three years of a lot of work I achieved my 2nd degree in Tang Soo Do.

While this was going on I started to train hard for my 4th degree and in 2007 was told I would also test for my Master’s ranking which I then achieved in 2008. A big surprise came in 2010 when my instructor Master Rick Heath who was getting his 7th degree awarded presented me with my 5th degree. It was done because of my service and time committed to the art and was one of the greatest honors I have ever had.

The time from 2010 to current I have been teaching four nights a week. This includes having classes that include 6 weapons and having multiple sets of students get their black belts in weaponry.

I started training in Krav Maga coming on three years. My first introduction was through a school that was ok but not enough true learning was taking place. I did it for 1 -1/2 and achieved my 3rd level in it. While this was going on I had purchased many many DVD’s to train in my basement. Then started communicating with multiple programs in Israel. All of them were very nice and helpful but with my back ground I really wanted to start a real testing program.

This is when I got a hold of Michael (Hodge). I sat in my driveway and talked to him for about 20 minutes. I could tell he had the same passion as I did and that night I ordered and started my adventure into to getting ranked through the system.

His feedback and now and Michael South have been fantastic. The real thing that needs dedication is logging your hours following exactly what they are saying on the DVD’s This is hard because of my other martial arts training and my teaching of Tae Kwon Do every night. But both of them understand it because they have a similar back ground which is great and the corrections are constructive and necessary.

The goal is to become a black belt through the their system and bring Krav to my students and anyone else who wants to join.

I can tell you with 100% conviction that it is the work that you put in is what you will get out of it. The web is full of different theories and videos, but with my background I would not pursue it if I did not feel confident in what Michael and his team are putting on the plate.

A couple last things about the journey of martial arts. Without my instructors wife Jan Heath and Master Rick Heath, a 7th degree, PH.D in martial arts, and in the Hall of Fame, and foremost a great friend none of this could be possible.

Then what all martial artists should do is pass on their knowledge which brings me to two fine women who put it all out there every night. They are single mom’s with kids in karate with them. They are busy busy women but have a passion for the art. There kids are wonderful because of their guidance and what the art does for them as a family.

While one of them teaches a lot and has her own class the other took over my class because I was away on business. She did great and it is that first step in passing on leadership. Whether it is Tae Kwon Do, Tang Soo Do or Krav Maga pass on the knowledge and you will be blessed.”

The instructors chose to highlight Phil this month out of admiration for his commitment to personal improvement, “white belt mindset”, and life mission of serving others through positive instruction of the martial arts. 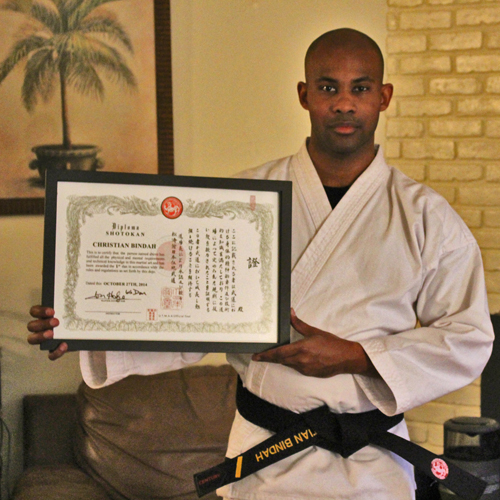 Tell us a little bit about your life.

“I was born as Christian Bernard Bindah December, 23rd 1981 in Queens New York. I grew up in Brooklyn, New York where life was very difficult for me, I faced many tragic situations that eventually led me to the world of martial arts. My mother Bernadette A Bindah (may you rest in peace) used to tell me “during dark times always focus on that pure energy within and never forget to smile because life is a lesson to be learned and taught once you’ve experienced it.”

For 24 years I’ve pushed myself through some difficult martial arts training and earn Dan Ranks in the following arts Shotokan Karate, American Lion-Style, Kenpo Karate, Taekwondo, and Tang Soo Do.”

How has it been training with Master Hodge and Black Belt at Home University?

“When I first came across the Black Belt University I was very skeptical about it, but after training for so many years in a dojo under Asakinion African Lion-Style Martial Arts, I fully understood the importance of how discipline a student has to be in order to train on his own. Eventually I reached out to the Black Belt at Home University paid my fees and began my journey in the Complete Shotokan Karate-Do

Training with Master Hodge has been one of my great experiences, not only Does Master Hodge demonstrates the techniques, One Steps, Self Defense and Kata’s but he also stresses the importance of having a solid foundation within each movement.

Every belt level was very challenging but as I trained I visualized myself not just being home, but in a actual dojo training with Master Hodge.
If I did a technique wrong I gave myself 50 knuckle push-ups and 50 sit-ups. If I felt lazy I gave myself more knuckle ups and even more sit-ups. To excel in life one must challenge him-self and push him-self to become better.

From the day I start as a white belt to the day I received my 1st Dan in complete Shotokan karate I made sure to contact Master Hodge and Sensei Michael Hodge whenever I faced difficulties during my training. They have truly been in my corner every step of the way and I truly appreciate them for all they have taught me because without them I wouldn’t have made it this far.”

What are you up to now?

I teach all of the arts that I have studied, helping to pass down the discipline and knowledge to each student that attends my class Praying that I make my mother my daughters and my martial arts masters and sensei’s proud.

I am also a student in Jeet Kune Do. At times its difficult training under so many different styles But, I always remember those famous words from Master Hodge “Remember to stay relaxed and focus through all the exercises”, “Breathing and eating right plays a major role in martial arts training”.

I train everyday; I have even created a schedule for myself to keep up with all I am doing. I am blessed to have the support from my martial arts masters, family and friends, to keep me on my feet during these difficult times in my life.

In January 2016 I will begin my Journey to 2nd Dan In the Complete Shotokan Karate-Do and although I train hard my concern has never been about the rank instead it has always been about the journey, no matter how high I rank in any school, I will always see myself as a humble white belt of life.”

Sensei Jon chose to highlight Christian out of respect and admiration of overcoming adversity, a desire to learn and improve, and ultimately on his goal of self-mastery. 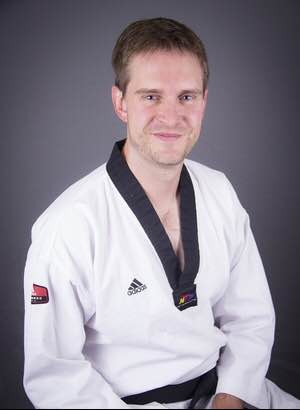 Robert Hunt is a co-instructor for Bighorn Martial Arts Academy in Lovell and Powell, WY. He began his martial arts training in Greybull, WY when he and his father first signed up for classes with Master Larry Voorhees in 1986. Since that time, Robert has continued training in Taekwondo and other martial arts with numerous qualified instructors. He received his 1st Dan in 1995 while attending his first Korean Martial Arts Summer Camp organized by Dr. Ken Min through the UC Berkeley Martial Arts Program. These camps provided Robert with the chance to train with top level olympic athletes as well as professors from UC Berkeley and Yong In University. While studying to be a high school English teacher, from 1996 to 1998, he taught taekwondo for Black Hills State University in Spearfish, SD. , and he has often volunteered his time to instruct for local programs wherever he has resided. Robert enjoys teaching in rural Wyoming and strives to provide a quality program for his students.

In addition to teaching martial arts, Robert enjoys teaching English, Speech, and Theatre at Powell High School and spending time with his wife and two teenage sons. He enjoys hiking and fishing in the Bighorn Mountains with his family. Robert received his 4th Dan Kukkiwon certificate in October of 2014 through his first instructor, Master Larry Voorhees.

Robert began the Ultimate Bo program because he had experienced bo training as a supplemental element for hapkido, karate, and taekwondo classes, and he was hungry for a program that would focus exclusively on the weapon. Robert enjoys the ability to train from home without having to sacrifice his teaching schedule or time with family, and he especially values the specific/personalized video feedback provided by Sensei Michael Hodge. He hopes to become a certified instructor of Ultimate Bo so that he can share his knowledge with students and provide them with additional opportunities for training and competition.

Sensei Michael chose to highlight Robert this month due to his excellent progress with the course, obvious passion for martial arts, and goals to be a positive influence in the lives of his students.