Stephan teaches martial arts classes in his local town to a group of students with a yearning for learning. He earned his 1st degree black belt in a Tae Kwon Do style, with a training emphasis on self defense. He has a desire to learn the most realistic form of self defense, and to be able to pass this on to his students – which led him to our krav maga program. He purchased the entire 10 DVD course, which in the equivalent to his local currency, was quite an expenditure. He is very committed to his own betterment and that of his local community, which can be seen through his life’s work as a pastor, and his martial arts teaching passion.

The instructors chose to highlight Stephan this month out of respect for his desire to learn, teach, and improve all that is around him. 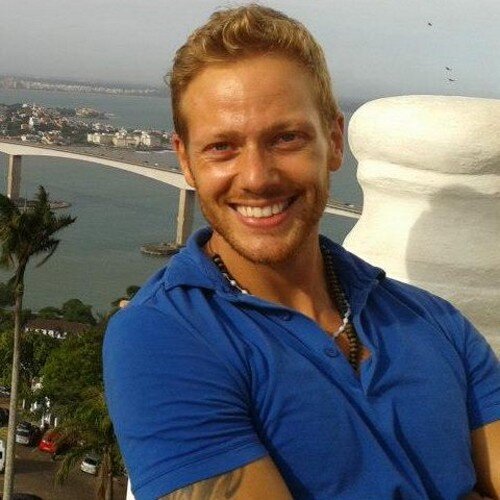 In his own words: “As for my martial art biography, My father is 4th dan in judo so i started martial arts pretty soon (as well as soccer) i started Yoseikan Budo at 5 years old, until 4th kyu, Yoseikan Bajutsu at 9 y old, I made taekwondo from 10 to 16 years old and when I’m in South Corea, practiced some ninjutsu, some aikido, muaythai, kung fu (wu shu)made competition of kick boxing at 20-22 years old, practiced some boxe as well, trained with nunchaku, kali, katana, tanto,.. and recently started brasilian jiu jitsu..

As I’m an international comedian ,model and student, I’ve always been annoyed to pause my training during traveling and had to find each time a dojo to practice abroad, I was deviating from the curriculum of the other ones.

Black Belt at Home is the answer to my situation and I will never thank you enough. Thanks to you I have a clear organized plan of all the techniques, katas, one steps, to know and perfect and I have a linear guidance in my path to Shotokan mastering.

I’ve been in three continents during the last months and the senseis are with me everywhere, I practiced in hotel room of Seoul, I’ve trained in Vitoria in Brasil, in a friend’s place in France, I check the curriculum in planes, buses, cars and I evolve as a martial art student.

I’m preparing for the Brown stripe and since the beginning i appreciate the development of the course into global martial art University and all the new courses, videos, and most of all, the feedback of Sensei Michael and Sensei Jon, always very complete and precise about wish part of the techniques to improve or work on. Thank you again for your support and commitment.“

Sensei Jon chose to highlight Tanguy due to his consistent progress and advancement in the program since joining a few years back. His unique work career and traveling could make it difficult to actually practice and put in the time needed, but Tanguy continues to impress his sensei. 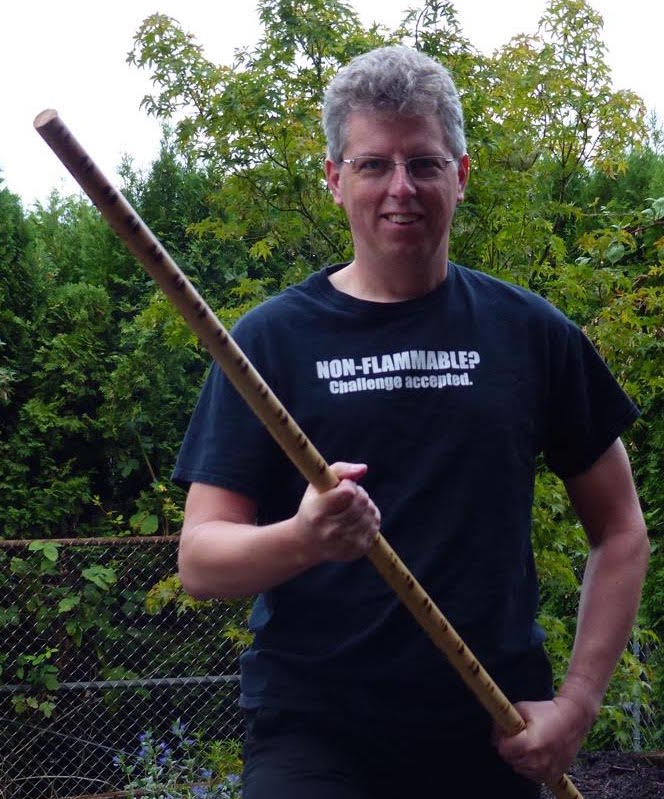 Here is a brief interview that Sensei Michael had with Mr. Drake:

Can you tell us a little bit about your interest in the martial arts?

I am a computer science professor at a small, liberal-arts college. Every year the students put on a lu’au featuring various Polynesian dances. After participating in the faculty/staff hula dance one year, I saw students perform the amazing Samoan fireknife dance (siva afi). When the organizers asked me if I’d participate again the following year, I told them, “only if I get to juggle fire!”

I told this story to the president of the student fire dancing club and he said, “Come by the club — we’ll train you!” I took him up on his offer and have since performed in five lu’aus and several other shows. In addition to the fireknife, I’ve taken up the fire staff.

Why did you start training with Ultimate Bo?

I decided to get some martial arts training to make my stances and staff movements more realistic and fluid. Most martial arts seem to require a couple of years training with hands and feet before weapons come into the picture, but the Ultimate Bo program let me cut to the chase. The ability to practice on my own time, in my own driveway, was an added bonus. I look forward to incorporating bo moves into my fire dancing and to the upcoming Global Martial Arts University.

Sensei Michael chose to highlight Mr. Drake this month due to his obvious love of staff training. His demonstrations and leadership in the fire dancing club also show his desire to share the art with others, which is most likely pretty natural due to his teacher’s spirit.