Nunchaku vs. Bo – Which Weapon Wins?

This weekend at Ultimate Bo Live (a global gathering of bojutsu practitioners), we had a training segment called “Nunchaku vs. Bo.” The purpose of the segment was to introduce the differences of the weapons, and proper way to defend or counter-attack one or the other. This was a lot of fun, and allowed the bojutsu students to realize that their blocking and grips must dynamically change based upon the threat that is presented.

Note: I have been practicing with nunchaku and bo for 15 years and am the creator of two weapons styles: Ultimate Chuks and Ultimate Bo. This background has given me the opportunity to learn the minuscule details of the weapons, for better or for worse. I clearly don’t know everything, and am always learning in my own training and with my students. 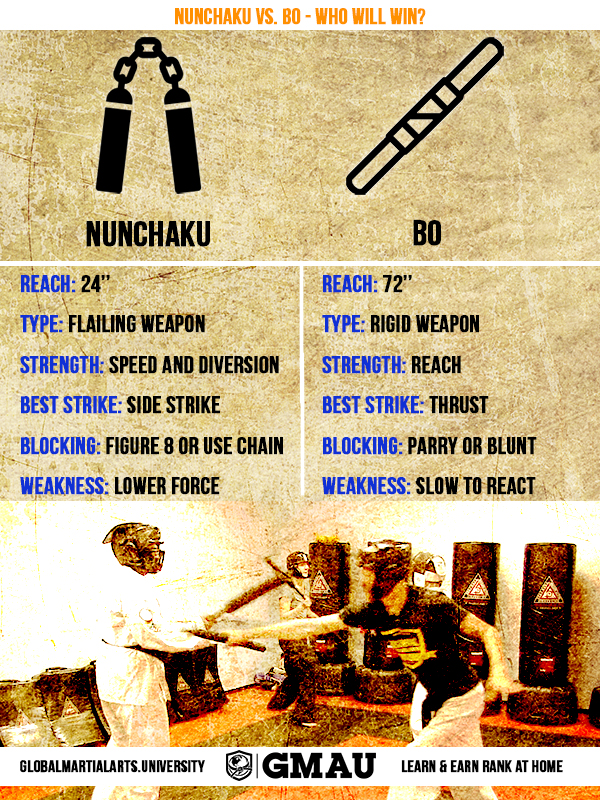 The Advantage of the Nunchaku

The nunchaku is a more compact weapon, which means that you can transport it covertly. It is not as obviously dangerous as say, pulling out a bladed weapon or a firearm, but can become lethal with the right practitioner. The nunchaku excels at quick strikes that can cause pain or distract, while then allowing to create an opening for a powerful blow. The nunchaku actually gives the wielder quite significant reach, when compared to something like a knife. The dynamic spins and rotations can make it difficult to read and allows for a more surprise-like element when fighting against chuks.

The Advantage of the Bo

Although it is not as compact, the bo can oftentimes be a much less obvious weapon of self defense. If you are hiking with a walking stick or even sweeping your porch, you have the ability to wield a bo-like weapon in a fighting scenario. A staff will not usually intimidate your opponent as much, which can be advantageous to you. The main advantage is the weapon’s reach. The ability to maintain a large distance between you and your opponent (if they have a knife for example), is quite valuable. The blunt trauma force that you can create with powerful descending and horizontal strikes can be lethal. The most disruptive strike is the thrust.

Defending Against the Nunchaku (with a Bo)

You can block with blunt (direct) blocks or you can parry the attacks. Using defensive blocks such as push parries or speed strikes to the nunchaku or the hand holding the weapon, can create an opening. And, use your reach. Favor thrusts and long or reverse grips to keep the attacker at a distance.

Defending Against the Bo (with a nunchaku)

If you are unlucky enough to be facing a stout hardwood staff, you will need to react strategically to finish the fight.

If you are unlucky enough to be facing a stout hardwood staff, you will need to react strategically to finish the fight. Use your chain as the main blocking surface. You will need to go back to the empty handy vs. blunt weapon self defense principle of “go in or out.” If you are far enough away, you can use footwork and simply move out of the line of an attack, while using the nunchaku to create a small wall. Or, if you are closer, move in. The closer you can get in, the less power the bo can generate, and the quicker you can counter attack, wrap up, throw knees, and even do a takedown if that fits your style.

After a good straight block with your chain, push the staff aside with some force and follow up with a fast side strike. Switch hands and create movement with your nunchaku when in a stalemate or to setup an initial attack. If you are able to close the gap, you can also use the nunchaku to do a choke to your opponent’s neck or to disarm the bo by wrapping up and creating pressure near the wrist.

If you pitted the world’s best nunchaku fighter against the world’s best bo fighter, in my opinion, the bo fighter would win. From my own sparring sessions, I feel like the bo strikes that do actually land have significant force. Whereas, even if I can land more strikes with the nunchaku, they tend to have less force, and might not end the fight.

Now it is your turn! Get your practice sparring bo and padded nunchaku. Implement the defensive and offensive strategies from this article and see how they fair for you