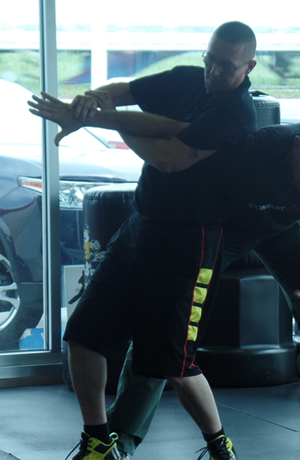 Mr. Dale is an experienced martial artist. Like many, he started with traditional arts, and was led to krav maga through wanting something more realistic and modern. “I have studied the martial arts for many years and have always felt there was a certain reality missing when traditional arts and self defense until a little over a year ago when I began studying krav maga“, stated Darren. For a year, he drove 1.5 hours each way (that’s a three hour round trip), just to train in a reputable and certified krav maga facility. The cost of the classes, coupled with the driving time and his schedule made him look for something else. “I love krav maga and really enjoy my training and would like to go as far as i can in the system but don’t feel i can afford the financial obligation or continue to drive that far to continue learning, this is really becoming a financial burden.” Darren transferred in his level 2 rank from his previous association into our program. Mr. South, the head Total Krav Maga instructor, stated that he passed with flying colors. Darren also travels around the country to attend krav maga seminars with internationally acclaimed instructors. He is also making a trip to Israel in November for a week long camp, to train at the birthplace of krav maga.

Mr. South has admired his dedication, consistency, and deep desire to learn and improve. It is apparent that krav maga has become a positive way of life for Darren, and we look forward to seeing him advance with us.

Below is a section of Darren’s Level 1 transfer-rank exam: 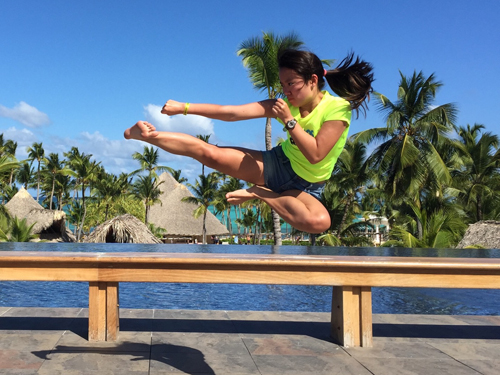 Claire has a competitive spirit and yearning for knowledge in the martial arts and life. Before joining Complete Shotokan Karate, she taught her self various aspects of the martial arts. Lacking an exact plan for advancement, feedback, and instructor support – she set out to find a program that would fit her goals. Since joining as a student, she has trained at a brisk and intense pace, while at the same time heeding feedback and corrective guidance. Speaking on her experience to this point, “Formally training in shotokan karate required me to push myself and practice more extensively than I ever have before. Even days when I had piles of work to do, I pushed myself to practice and improve on my current skill-set as well as my previous ones. That is self discipline. I didn’t want to learn martial arts so I could become the best fighter in the world. Learning martial arts meant more than that to me – it meant self control and discipline. I learned how far my strength and courage will take me and how to meet and defeat my limitations.” When not practicing shotokan, Claire is a high school student, and competitive tennis player. She finished #1 in singles in her freshman and sophomore year. 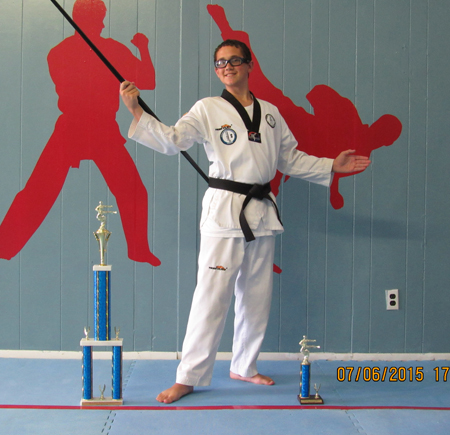 In his own words: “I started taking Tae Kwon Do at the age of 9 at Tommy’s Tae Kwon Do in Lenoir City, TN. I received my black belt in Tae Kwon Do on Dec. 14th, 2013. After I received my black belt, I started helping teach class. I am currently working toward my second degree in TKD. My goal is to reach fourth degree in TKD. I started training with the bo staff in November 2014. I just passed the Ultimate Bo green chevron exam. I am working toward my black chevron in Ultimate Bo. I am also learning jiu jitsu. I attended my first martial arts tournament on June 13th, 2015. I won first place in weapons demonstration ( with bo form 2) and third place in sparring at the All American Christian Martial Arts Tournament in Pigeon Forge, TN.“

When not practicing martial arts, he is active with his church’s youth group and vacation bible school. He plans on majoring in criminal justice and would like to become a federal agent.

Sensei Michael wanted to highlight Elijah this month for his accomplishments with the staff. A humble attitude coupled with a focused and determined mind will take you far.

Below is a video of Elijah executing Bo Form 2 from his green chevron exam: