In his own words: “My name is Taylor Marlow and I live in Kingston, Idaho. I currently serve as a patrol Lieutenant at the Shoshone County Sheriff’s Office, where I have worked for the past 10 years. Before that, I served 5 years in the U.S. Marine Corps, with two combat tours in Iraq and Afghanistan.

I began training in Martial arts when I was 6 years old, and have trained in multiple disciplines over the years to include Goju-ryu karate (Shodan), Tang soo do, Jiujitsu, and kyushojitsu. While in the Marine Corps, my love of martial arts naturally drew me to the newly still developing Marine Corps Martial Arts Program. While serving, I had the pleasure of training extensively in this system and assist (however slight) in its development. Unfortunately for me, when it came time for me to re-enlist, my request to be assigned solely to the program headquarters in Quantico, Virginia was denied, due to the program being shut down for a few years due to large amounts of injuries Corps-wide. Training 20 year old Marines for 6 weeks, calling them “martial art black belt instructors” and sending them out into the world to instruct close quarters personal combat probably wasn’t the best idea. . . . . . . .

After separating from the Marines, I began my second career as a law enforcement officer. As always, martial arts drew me to my path. I currently serve my agency as a state certified instructor in many use of force subjects. These include: Defensive tactics, arrest techniques, handgun, shotgun, rifle, submachine gun, combat firearms and patrol response to active shooters. I will be receiving a master instructor certification in firearms later this year. Currently ,under my instruction, our officers receive more defensive tactics training than any other agency in the state. This resulted in a massive reduction in use of force incidents agency wide.

While Idaho is beautiful, it suffers from a severe lack of martial arts training opportunities. A co-worker of mine, Holly Lindsey (also a TKM student and my training/work partner) found your training and brought it to my attention. I admit, I was skeptical of distance learning martial arts. However, I kept an open mind and was impressed with your program as it was unlike any distance learning program I had seen. My goal here is to of course continue my own training and growth, but more importantly, to add to and expand the skill sets my own student officers.

Mr. South chose to highlight Mr. Marlow and Mrs. Lindsey out of respect for their life’s work, great communication, and consistent implementation of their training regimen. 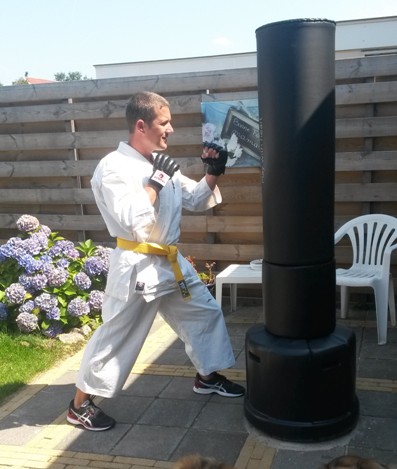 In his own words: “My name is Laurens, 41 years young, married with my high school sweetheart, having kids, cats and dogs, living in the Netherlands.

Then I had to enlist in the Marine Corps. I’ve been in the military for 23 years now. I have worked as a drill-sergeant, and just recently I’ve been chasing pirates in the gulf of Aden. I ‘m a war veteran. I’m almost continually travelling the globe. When having a rest and recreation break during a mission. I was surfing the internet and came across blackbeltathome.com and immediately thought it was a MCdojo fake karate non-sense. Then I watched a few YouTube videos from sensei Jon, it is pretty good, he is very likeable. I studied the site, it looked okay, so I decided to give it a go. Nothing to lose.

The sensei’s Jon and Michael are really easy to communicate with, if I have a question they answer friendly, professional and quick. The training material is good, the exams aren’t easy…you really need to earn a rank/belt. It is no fake MCdojo :). I can train where  and whenever  I have the time. I just took the yellow belt exam and  received a 25 minutes long personal video from sensei Jon reviewing my material and from his feedback I can tell that he really studied my exam and student journal. He showed me some good pick-up-points, …he impresses me. I feel taken serious as a student and I feel like the sensei’s are my friends.

I study Karate, Relax my mind and have great FUN doing it! I watch the videos online, then train the Kihon, Ippon Kumite and Kata’s. I work the standing bag twice a week to “feel” the punches and kicks, hit it wrong and it hurts :).

I do sparring against my buddies (and coach the young WannaBees), who practice (kick)Boxing , Kyokushin Karate and Krav Maga… etcetera. I do pull-up’s, pushups, hanging leg raises and squats, run and use a jump rope a few times a week. I try to eat proper and sleep well most of the time, and YESSS I like pizza and beer.

If you have the discipline, then use the material and support from these men, and go for it!!! Highly recommended. Shotokan Karate is so much more….just explore.“

Sensei Jon chose to highlight Laurens due to this excellent yellow belt exam. Previously, he did not know about his rich previous martial arts experience, but it was obvious this was not Laurens’ first martial arts program. 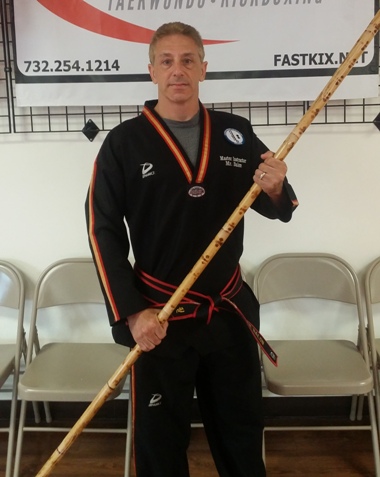 In his own words: “I met my wife and two step children through Taekwondo and have built my 25 year career as a martial artist. I love being challenged and my desire to learn new skills keeps me motivated in life and in my business.

I have limited experience with weapons and I once learned a bo form called wu-suchi many years ago from a local kung fu instructor but never had any formal training after that. Also, I attended several seminars with Dan Inosanto and learned the escrima sticks which was very informative. I have seen the Ultimate Bo advertisements and I researched many other programs before deciding to try it. Master Hodge is a genuine instructor who has created a very thorough and structured program. The feedback has been very helpful and I am looking forward to continuing and starting other programs. Recently, three of my students competed with the ultimate bo forms and all earned Gold medals at the AAU Taekwondo Junior Olympic Games held in Virginia Beach, VA.

I can see why many martial artists may frown upon learning from videos but for those of us who have no other resources or time, the Ultimate Bo program works perfectly. I would highly recommend any instructor who may have been thinking about learning or adding weapons training to their curriculum to consider giving Master Hodge and the Ultimate Bo program a try, you will not be disappointed.“

Sensei Michael chose to highlight Mr. Balon this month out of admiration of his humble attitude to constant white-belt spirit. It can be rare to find master level instructors, who still desire to learn something new, without reservations.